This marathon gets held on an annual basis in Scotland where athletes run a distance of forty two point one nine five kilometers. The competitors have to ensure that they beat each other to the finish line and the one with the least time bags the win. 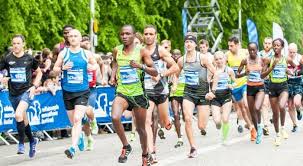 The first such event got held in the year 1982. It performed so well that as from 2003, it became an annual activity that takes place each year in May. The athletes meet up at the city center, and once the race is flagged off, they make their way out of the town and head into East Lothian where they complete the marathon at Musselburgh.

This road race has gotten an award as an IAAF bronze label status, and it gets governed as per the regulations of the Scottish Athletics.

The race was first held on the fifth of September back in 1982, and the track started from Holyrood Park and went all the way to the Meadowbank Stadium. Four years later, it got held in June before finally becoming an annual event in 2003.

Geog Sims was instrumental in making the race an annual festival which attracted over three thousand athletes in 2003. They used a route that started from Meadowbank Stadium through Princes Street all the way to the Royal Yacht in Britannia. Frank McGowan took the prize home with an impressive time of 2.35 while the slowest athlete took six days to finish the race.

As of 2007, the race organizers came up with a route that headed into East Lothian moving into Prestonpans and ending at Musselburgh. In 2010, the race registered an average of twenty-four thousand participants, and in 2011, it lasted two days. Other than the full marathon, the festival also includes competitions such as the 10K, 5K and two junior races.

Over time, this festival has grown to attract athletes from all over the world, and there are plans underway to make it even more attractive to runners.